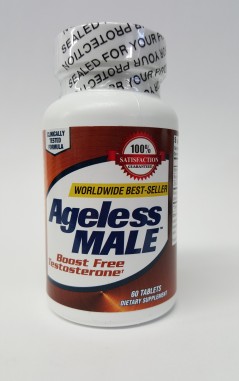 According to AgelessMale.com “For years, Ageless Male has been the name men trust for low-t support. That’s because it’s made with a natural extract from the fenugreek plant – that was shown in a “double-blind human clinical trial” to significantly boost free t-levels in men! Men who use Ageless Male see real results, and they keep using it because it works.” We have sent Ageless Male to one of the most reputable testing facilities in the country to see if it will really work like it claims. You’ll be shocked what our lab reports discovered!

Ageless Male contains Zinc, Vitamin B6, Magnesium, and 300mg of Testofen. Every single one of the claims on their website circles around the “claims” purported by the makers of the patented Fenugreek extract Testofen. The claims and “clinical studies” surrounding Testofen were nothing short of miraculous.

Testofen is a product derived from fenugreek seeds. But according to at least one Testofen lawsuit, multiple studies have suggested that fenugreek has no discernable influence on t-levels, and was actually outperformed by a placebo in one trial conducted in India. Gencor Nutrients, which manufacturers Testofen, stands behind the efficacy and safety of their product and says they will defend all allegations.

Despite four studies since 2006 that demonstrated the lack of statistically significant increase by Testofen consumers, the plaintiffs allege that GNC has continued to market its fenugreek-based products under 20 separate brand names.

So, Will Ageless Male Really Work?

When we heard about this class action lawsuit against Testofen for RICO and fraud we were floored. There are tons of products that use Testofen as their primary ingredients based solely off of Testofen’s purportedly fake clinical studies. I went to the Testofen website to read these studies. Unfortunately, or perhaps conveniently, there is no documentation on these “clinical studies”.

My guess is that GNC, Gencor (the makers of Testofen) and all parties named in this suit will fight it tooth and nail. There is A LOT of money at stake for these companies. With all of the allegations surrounding Testofen as a legitimate ingredient, I would steer clear of any product containing Testofen until the dust settles on this lawsuit. Your money is better spent on a product that contains a high quality Tribulus Terrestris extract.

If you pull out Testofen, Ageless Male is a pretty weak supplement. There is nothing else the formula that will work.

If you search for Ageless Male on the internet, you will probably come across their “Special Web Offer”. Well, this offer may appear special… until you read the fine print. Essentially you are offered an “introductory price” of only $19.95 + $6.99 shipping and handling for your initial, risk-free 30-day supply. Starting 30 days from your initial order date, you’ll receive a new 30-day supply of Ageless Male every month for only $39.95 plus $6.99 S&H, which will conveniently be charged to the credit card you provide today. They will continue to send you monthly shipments of Ageless Male until you call to cancel. There is no minimum purchase obligation, but prices are subject to change.

I alway recommend avoiding, at all costs, free trials, auto-ship programs, or anything that sounds too good to be true. Often times, and other websites will confirm this, these auto-ship programs are really difficult to cancel, let alone get your money back/

Grade: D. Ageless Male contains a highly suspect ingredient. Will it work as promised? Is it too much of a risk to throw your money at this product? Like I mentioned earlier, I would hesitate to purchase any product that contains Testofen, escpecially a product like Ageless Male whose only ingredient is Testofen. I recommend checking out the lab reports on our “Top Rated” supplements. They are the ones that contain the most effective compounds available.