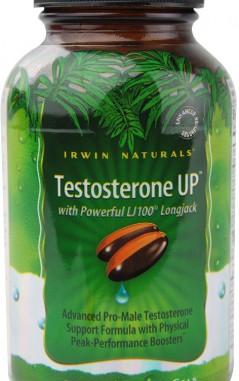 If Tribulus raises natural t-levels, its effects appear to be dose-specific. In other words, the delivery of active protodioscin seems to be effective if you take the right amount. Too little and it doesn’t appear to work. The sweet spot seems to be consuming enough Tribulus so you get at least 4 milligrams of protodioscin per pound of bodyweight per day. The issue is every supplement company, like the makers of T Up know that Tribulus is the most important compound. It’s not an issue if company’s use the correct dosage. Unfortunately most companies just use a token amount of Tribulus to keep costs down and just use other “filler” ingredients. So, how much protodioscins does Irwin Naturals T Up really contain?

When we got the lab reports back for T Up we were shocked! Our official labs reports show that T Up only contains 5.594mg of protodioscin! Incredible! Take a look at the lab report: Even with all of the other ingredients, T Up is a pretty weak seupplement.

Final Thoughts on T Up

Grade: C. T Up contains a minimal of the saponins found in Tribulus. I recommend checking out the lab reports on our “Top Rated” supplements. They are the ones that contain the most effective compounds available.